Prosodic Alignment at the Word Level

Description: This workshop is concerned with phonological and phonetic boundary effects reflecting alignment of the phonological word or of a smaller prosodic constituent to the morphological word. (→more detail)

Organization of segments into prosodic constituents is well known to be sensitive to morphological boundaries. Thus, the difference between the cluster tr being syllabified as a complex onset in the English word nitrate but being coda t plus onset r instead in night rate evidently is a result of their difference in morphological structure.

Currently, a widely accepted approach to this kind of phenomenon involves the notion of 'alignment'. According to that, prosodic domains are in place to satisfy constraints that demand that all morphological constituent boundaries of a particular kind (e.g. word, stem, affix) coincide with a prosodic constituent boundary of a particular kind (e.g. phonological word, foot, syllable).

This specialized workshop is on alignment, with focus on word-internal morphological and prosodic constituents. The workshop is to be centered on empirical generalizations rather than being committed to any particular theoretical framework.

We particularly welcome contributions regarding:

For practical reasons, our principal interest is in the following languages (in alphabetical order): English, French, German, Hungarian, and Polish, but also extends to other languages (esp. of Europe) including nonstandard varieties of the languages already mentioned.

Presentations will be 35 minutes, followed by 15 minutes of discussion.

Working language at the workshop will be English.

All speakers at the conference, whether by invitation or by competitve selection, have been booked rooms at the Balladins Hotel at C 7, 9--11, in Mannheim ("C 7, no. 9--11" is the street address, see below), for the nights of 19/20 plus 20/21 Nov, which is paid for (including breakfast) by the IDS. (Some participants have requested modifications -- those arrangements will, of course, be honored as agreed on!)

Travel directions to the venue

Air
For most purposes, the closest relevant airport is that of Frankfurt am Main. There are express train ("ICE") connections that run nonstop from Frankfurt am Main airport to Mannheim Central Stn once every hour (EUR 43 R/T, = EUR 21.50 one way). (While nominally, Mannheim does have an airport, that one is served infrequently and steeply priced.)

Road
(Please inquire with us individually.)

From station to IDS

From station to hotel

From hotel to IDS

The city center of Mannheim doesn't have street names (apart from a few nicknames), but rather, the blocks between them do: They are, in fact, numbered in a grid of letters and digits -- more precisely, two half grids one being A1 through K8 (left half) and the other, L1 through U8 (right half), each one starting from the palace (this system is >200 years old). 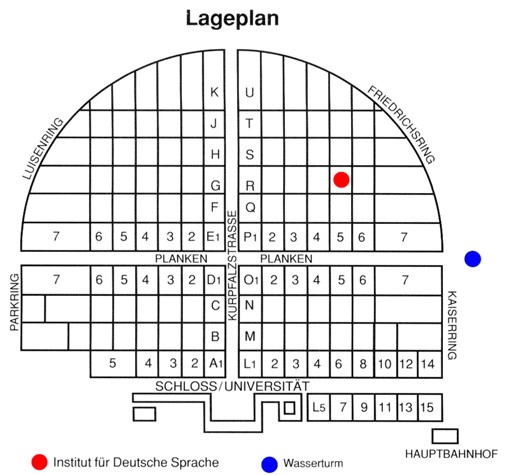 "A" and "L" are nearest the palace on their respective sides, and "1" is nearest "Kurpfalzstraße", where the two halves meet. (When coming from the train station, note that the "L" numbers have been messed up by prepending another row.) Houses are numbered clockwise or counterclockwise around each block. The entire gridded area is less than 1.5km wide and long altogether (i.e. everything within is conceivable walking distance), but note that blocks are somewhat unevenly spaced.